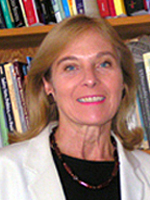 Cynthia McClintock is Professor of Political Science and International Affairs at George Washington University and Director of GWU’s Latin American and Hemispheric Studies Program. She holds the B.A. degree from Harvard University and the Ph.D. from the Massachusetts Institute of Technology. Dr. McClintock was President of the Latin American Studies Association in 1994-95. Also, she was a member of the Council of the American Political Science Association in 1998-2000, and served as the Chair of its Comparative Democratization Section in 2003-05.

During 2006-2007, Prof. McClintock was a Fellow at the Woodrow Wilson International Center for Scholars. Based on her research at the Center, she is writing a book on the implications for democracy of runoff versus plurality rules for the election of the president in Latin America.

Prof. McClintock has received fellowships from the U.S. Institute of Peace, Fulbright, and the Social Science Research Council as well as from the Woodrow Wilson International Center for Scholars. She has testified before the Subcommittee on Western Hemisphere Affairs of the U.S. House of Representatives and has appeared on a variety of television and radio programs, including the "News Hour with Jim Lehrer," CNN International, CNN Spanish, National Public Radio, and the Diane Rehm Show.

Professor McClintock's primary current research has been on the impact of presidential-election rules on democracy in Latin America. In her book under contract with Oxford University Press, she argues that runoff rules are superior to plurality rules. She is also continuing research on Peru, including in particular extractive industry in Peru and Peruvian foreign policy.

Prof. McClintock is the author of Electoral Rules and Democracy in Latin America published by Oxford University Press in 2018. She is also the author of a chapter on U.S.-Peruvian relations in the twenty-first century in a 2016 volume on U.S.-Latin American relations co-edited by Jorge Dominguez and Rafael Fernandez de Castro. With Prof. Aldo Ponce, she co-authored an article on extractive industry in Peru that was published in Latin American Politics and Society in 2014. Also, with GWU Ph. D. candidate Barnett Koven, she has co-authored various book chapters on security issues and U.S.-Peruvian relations that were published in 2014-2016.