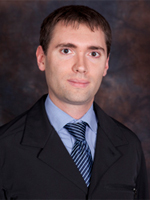 Matthew Hindman is Associate Professor in the School of Media and Public Affairs. His work focuses on political communication with a concentration on Internet politics.

Dr. Hindman's book The Myth of Digital Democracy, published in 2009 by Princeton University Press, looks at the Internet's impact on American politics. Parts of the book present evidence that the Internet has indeed mobilized previously inactive citizens, and changed the way that campaigns and interest groups recruit, communicate, and raise funds. However, the book also uses several new data sources — Internet service provider traffic data, a three-million-Web page survey of link structure among political sites, a census of top bloggers, and systematic data on search engine usage — to show that online political messages are still created and filtered by a small set of elites and media institutions.

The Myth of Digital Democracy won Harvard's Goldsmith Book Prize as well as the Donald McGannon Award for communication research. In the past two years, Dr. Hindman has been given presentations or invited lectures at Harvard, Yale, Princeton, Columbia, the University of Pennsylvania, Stanford, and Oxford. The book has been referenced by members of the Federal Communications Commission in public speeches, and featured on NPR's On the Media.

In addition to the book, Dr. Hindman has published on other topics including online campaigning, "open source" politics, and the online public sphere. His article "The Real Lessons of Howard Dean" was deemed the best article of 2006 by the Information Technology and Politics section of the American Political Science Association. Hindman has published several op-eds in the New York Times on technology issues.

Dr. Hindman has previously been an assistant professor of political science at Arizona State University. For the 2010-2011 academic year, he will be a nonresident Faculty Associate with the Berkman Center for Internet and Society at Harvard. His next book will be on the political economy of the online public sphere.